After two years of intending to remove the engine and transmission, it is finally out! 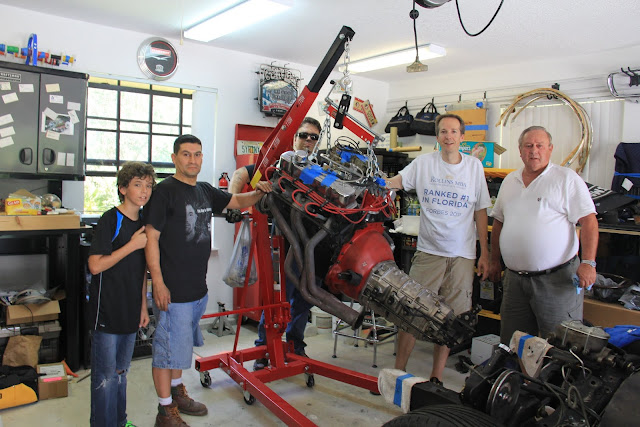 HUGE thanks to Craig, Luis & Ron for their help!

And some notes for the “I should have known better”, and the “remember next time” categories:

– Transmission fluid – have a plan in advance
– Coolant – there is still some in there, and it will come out after you’ve tilted the engine a few times
– Would be much easier if headers were unbolted from the heads and came out separately
– Removing the distributor cap would add more clearance
– Removing the Transmission crossmember isn’t an option
– Motor mount plates need to come out if the headers are coming out with the engine
– If I’m planning to remove the subframe soon anyway, why didn’t I just lift the body off the front subframe? (This dawned on me shortly after finishing)

All in all, it was only a few hours, but it felt far more difficult than it should have been.

I’m still waiting for the engine cradle to arrive (annoyed) but we braced it well enough for now. If it doesn’t arrive soon, I’ll go back to the original plan and fab one. My welding sucks, so I could use the practice anyway.

We also rotated the car so that I can get the subframe out of the garage once it is removed. More on that later…