My good friend Luis is a bit of a Hockey nut. He not only watches hockey (He’s a Rangers fan…), he pre-plays the games for the Rangers on his xbox with his brother. He also has an “original 6” table hockey game with a custom cover made by his family. 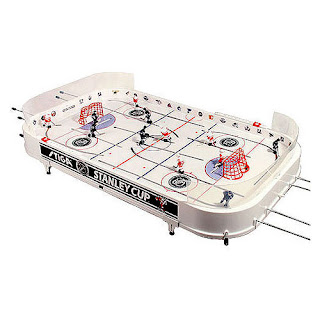 I don’t think that is the exact model, but you get the idea 🙂

A few years ago, I was scrapping an old air hockey table and Luis took  the scoring system and modified his table hockey game to use the scoring mechanism.

He cut out the goal area so the puck could go down into custom lexan fixtures that hold the air hockey table scoring switches. 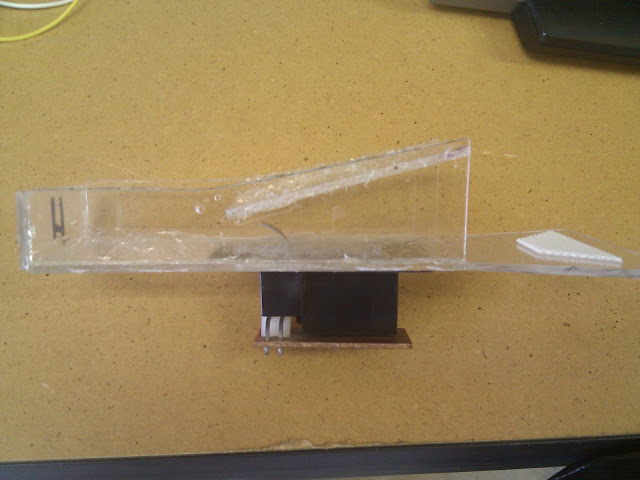 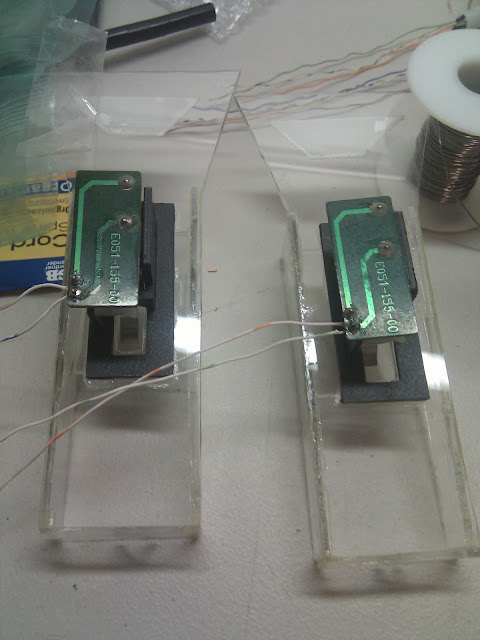 These velcro to the bottom of the table hockey game. They are removable so the table can be transported and still lay flat.
Last year when I got into messing with arduinos, we were kicking around the idea of making a custom scoreboard for the table that would use the Adafruit WaveShield to play hockey arena sounds & music.
At the time I wrote out some basic plans, but focused on finishing my son’s “control panel” and finishing my MBA.
A month or so ago, I found the NCR VFDs at Skycraft and this triggered the scoreboard idea again. I made a shopping list for Luis, he ordered the parts and off we went.
The project has come together quickly. We had an afternoon where we soldered up the WaveShield and modded his VFD for TTL serial. I have worked on the code a few hours here & there, and Luis has been working on getting the components mounted. Since I didn’t have my shiny new welder this week (thanks UPS – once again you screw with my happiness!) I decided to really get moving on this project. I wrote most of the code logic yesterday and today we got the prototype case finished up.
Here is the VFD mounted in the case. We had a little mix-up on the VFD dimensions, so the prototype has a little extra view of the VFD 🙂 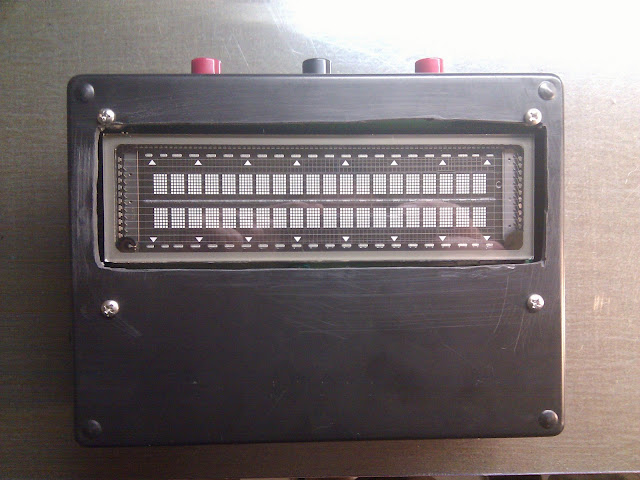 Side view showing the lighted power button and power jack 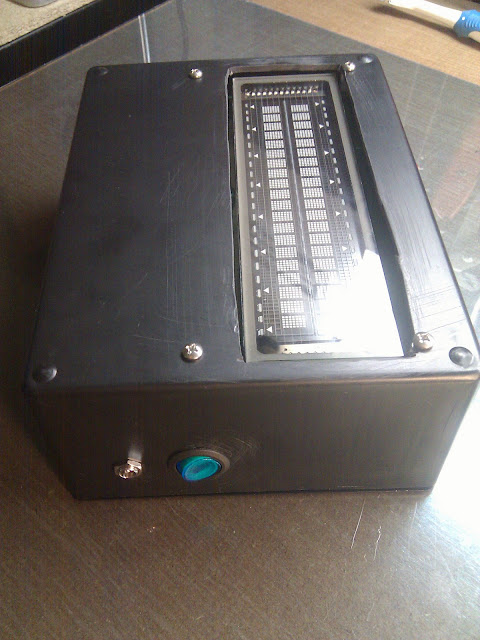 A shot of the inside wiring – Arduino and WaveShield on the bottom right, VFD is the big board, buttons up top. We’ve since added an RJ45 “magic jack” with a SparkFun breakout board at the bottom. It will be the connection to the table switches and LEDs. The green wire coming up the middle of the VFD board is the TTL mod. 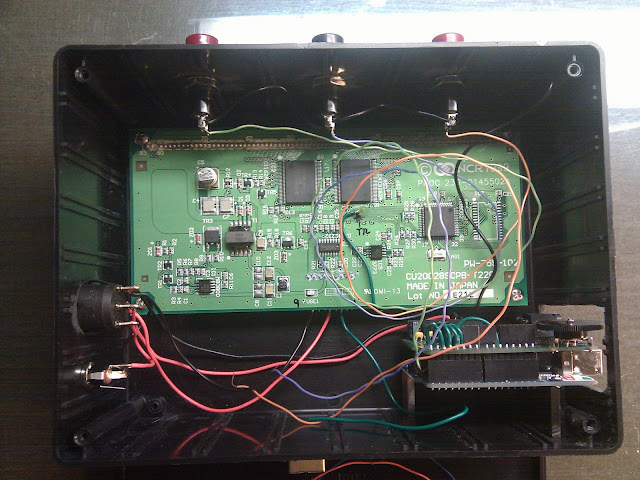 .  So, how will this thing look in action?? Here it is next to the table. The wires on the side of the table are where the scoring / intermission LEDs will be placed. 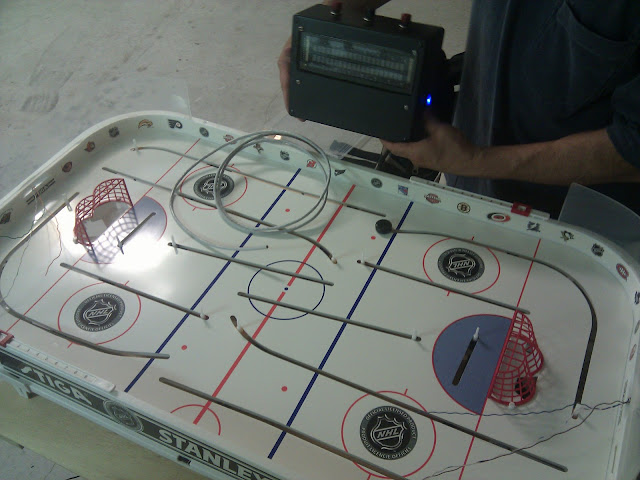 Intro screen…music will be playing… 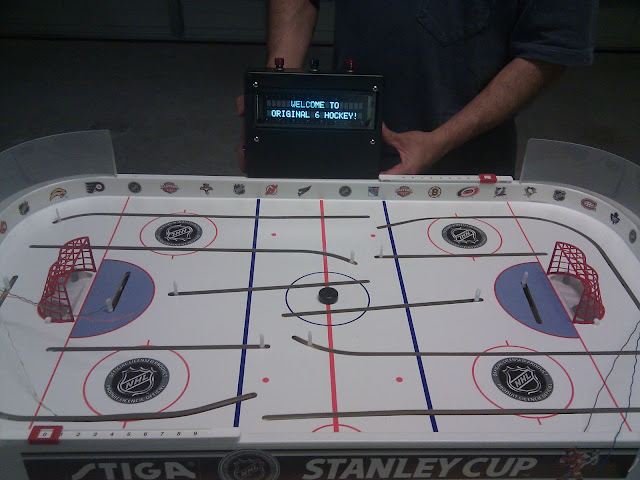 Select the home team. The middle button is “next” and the right button is “ok” in this mode. 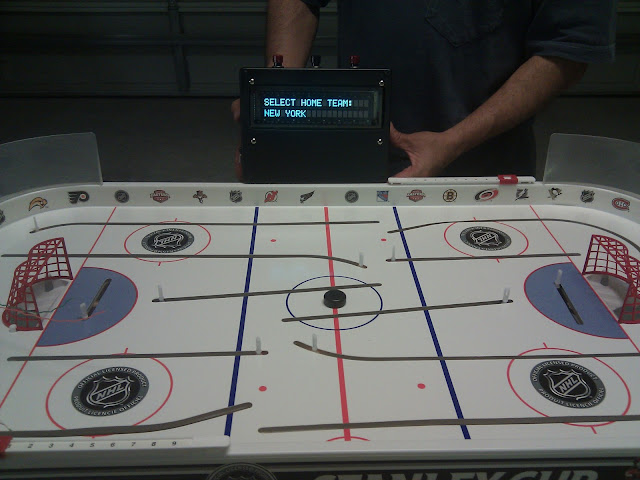 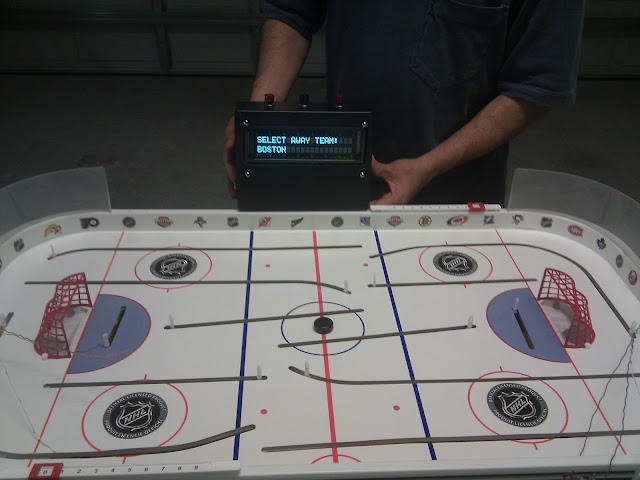 We are making the periods 20 mins like “real” hockey, but then making the clock run down faster. Not sure it will stay this way, but makes life much easier for testing because I can set the scale at a crazy high number and get periods that are a few seconds long 🙂 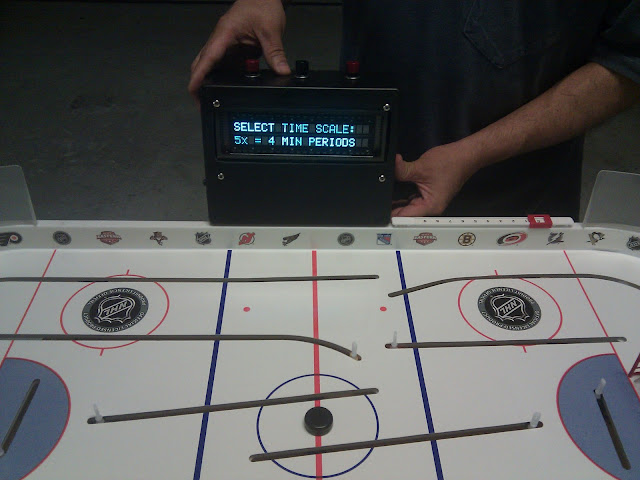 In game shot… (scoring switches not connected yet…) During the game, the right button is “play / pause”. After a goal, the timer automatically pauses and then a button is hit to resume gameplay (after a short timer to allow the person hitting the button to “ready” themselves…) 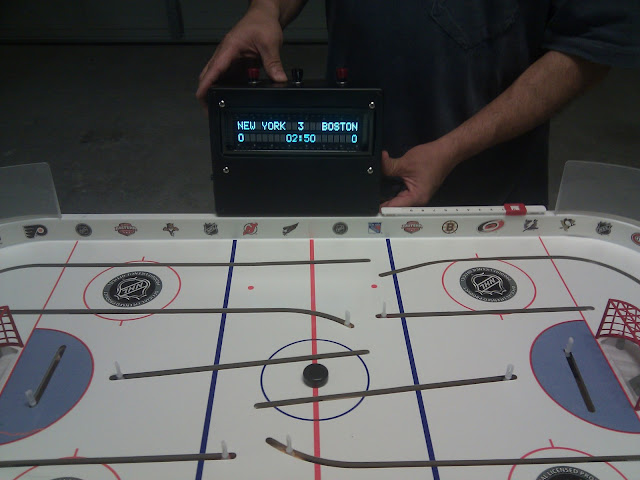 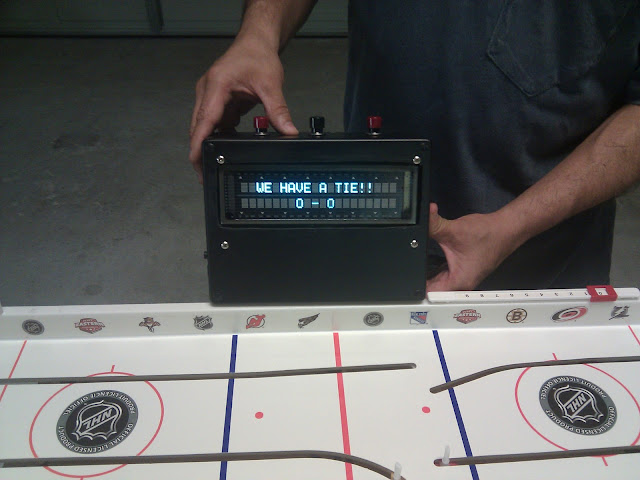 I’m really excited to get the sound / music code integrated and get this thing connected to the table. I might even have to learn how to play!