>Vacation has its benefits – one of which is the ability to clear the mind & think about a topic over a few days. When we are at the beach, I usually have a few hours every morning where others are still asleep, so I go for a walk on the beach. Since Candy is back in Orlando, I haven’t been taking the morning walks, but instead sitting on the balcony watching the sun come up while surfing the web. I had some targeted web surfing this week – mostly figuring out how to get this Firebird project moving so I can have the car moving in September as it starts to cool down.

Earlier in the week, my web surfing paid off when I found the MOSFET I needed. This is the most critical part in the whole system – the high-power switching. Once I knew that the IPS6011 would meet my needs, I started thinking about enclosures – specifically the underhood enclosure. I’m not worried about the enclosure for the dash or trunk, since those don’t need to be weatherproof to meet my needs. The underhood enclosure has to withstand a good deal of heat, moisture, etc. and ideally, LOOK GOOD. 🙂
I spent lots of time searching for IP67 rated enclosures and sealed connectors or cable glands. I found a few options, but nothing was really making me happy. I knew that Delphi weatherpak and metri-pak connectors were the way to go for automotive stuff, so I headed to the Delphi site. Once there, I found the catalog I’d seen once before, but had forgotten and I had an AWESOME thought. Modular fuse blocks! 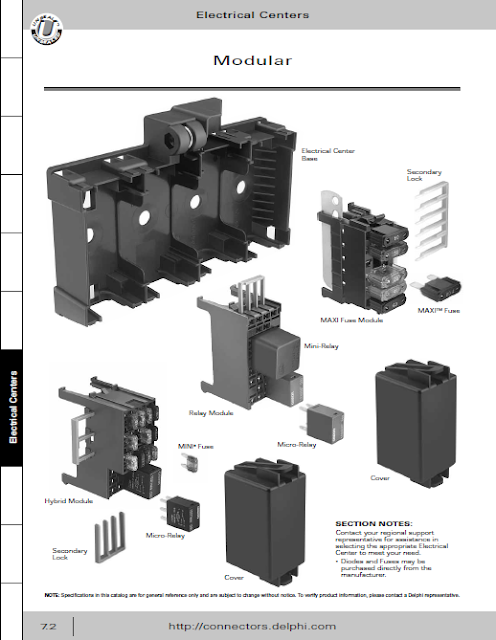 I had to turn my thinking inside out – instead of an enclosure that was sealed and contained the microcontroller (or I2C expander), the 10 IPS MOSFETs and the 10 fuses, why not do the fuses externally. I’d also had this crazy thought for some time – What if I could fit the MOSFET in a fuse housing, then I could just plug them into a fuse block. Unfortunately a fuse only has 2 connections and the IPS MOSFETs need 5. Then it hit me – a Relay has 5 connections. I can make each IPS into a module that is the same size as a relay and they can just PLUG IN. Woah.
My first thought was to buy relays, gut them, install the IPS and any indicator LEDs and reseal them. Seems like a lot of work AND it then looks like a relay when it isn’t one. I was also worried about the thermal load of the IPS in that little case. If only I could make the case from aluminum and it would act like one big heat sink. THAT’S IT! I can buy aluminum block, cut to size, drill out for the LED(s) and the IPS and attach the IPS right to the aluminum case. I can use epoxy to “Pot” the IPS and terminals in place. I’m guessing this puts the parts cost of each module at ~$10. For the prototypes, I’ll machine them at home, but if it works right, I can see ordering them nicely machined, looking all fancy and mac-book like 🙂
Ok, so now I solved for the IPS and for the fuses, but I still need to house the microcontroller or the I2C expander (just called the “control circuit” to make it simpler). Both can fit in very small packages (if ordered with SMT).
Assuming the use of the 4 module electrical center above, I would have one with mini fuses (bottom left in the pic above), and 2 that hold 6 micro iso relays (not shown). That gives the capacity for 12 fused IPS circuits, and a spot for two extra relays if needed (cooling fans, etc). That leaves space for one more module, which can contain the control circuit.
I started counting connections…
Connections to “master” = 5
+5v
Gnd
I2C SCL
I2C SDA
Interrupt request (saves the master polling for diagnostic issues or inputs)
Connections to IPS circuits = 24
1 control line per circuit (lets stick with 12 circuits for now) = 12
1 diagnostic line per circuit = 12
So for a 12 circuit system, I have 29 connections.
I started looking for connectors, trying to think of how I’d mount the module and the connectors. I kept thinking, “there must be an easy way” – then I realized – the modules that hold 6 relays have 30 connections…hmmm…
Sure enough, I can take the same approach as the IPS. Aluminum enclosure (or plastic since I’m not worried about heat), spades stick out the bottom for all the connections, potted. The entire thing just pushes into the module. I’m a little concerned about removing it with 30 connections, and about getting all those spades mounted right – so I’m not sold on this one yet. There may still be a better way, but I need to get the electrical center here to see it.
What I LOVE about this option, is that it is crazy modular. You can scale the number of circuits up or down very easily. Only need 8 circuits, you only have to make / buy 8 of the IPS modules. Fry an IPS (not sure how given all its internal protection), just pop one out and replace it. If they can dissipate heat properly, I might be able to even put two IPS in one case DOUBLING the current capability (BIG cooling fans with PWM…) Best part is minimal manufacturing, and it should blend into the engine compartment since people are used to seeing these electrical centers and not really giving them a second look. With this design, there are quite a few electrical centers that could be used – just a matter of picking the one that meets your needs.
mouser.com carries all the delphi parts and they can all be ordered by the piece. I priced out the modular center concept above and BEFORE terminals, it is ~$50. I’m guessing I’d spend another $20+ on terminals. While this might seem pricey, I will no longer need a large PCB design…A small and simple PCB for the control circuit is likely all that is needed.
I’m sure there is more to be solved – but at the moment, this feels like a VERY good direction. If it works out well, I can use the same mounting system in other parts of the car – but without the need for the sealing, I may keep it simpler. Then again, this may prove to be the way to go all around…that electrical center is only 7.24″ x 4.6″ x 1.65″…which would fit well in any of the spaces I’m thinking…
I haven’t pulled the trigger on the order yet. All this is contingent on the IPS working the way I need. The IPS order should be at the house today – I’ll get them tested, then I’ll build one of my micro-relay aluminum IPS modules, make sure it can take the heat – if that all works, I’ll order the electrical center and get started on the control circuit mounting. I suppose I should get to work on the actual control circuit, but for some reason that seems “easy” to me once the IPS and weatherproof mounting get solved. I’m sure I will regret thinking that later 🙂