I’m keeping the boys entertained at the beach this week. My need for constant stimulation has CLEARLY been passed onto them, so yesterday was an action-packed day. We started the day by building a 3x3x3 LED cube driven by an Arduino. 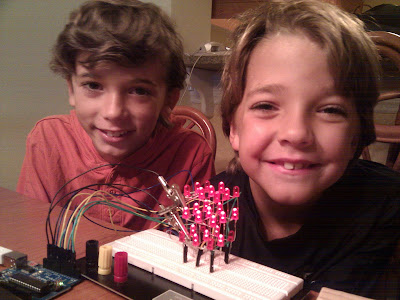 I’ve seen these on youtube, the Arduino forums, Make, Instructables, etc. and have wanted to make one for a while. I reviewed lots of the different instructions and settled on this one from Instructables since it included Arduino animation code.

Before we left for the beach, I made a quick wooden jig on a 2×4 scrap. I created the dot grid using the “Square Dots Graph Paper PDF Generator”. I made a 4×4 grid, even though I only intended to build a 3×3 cube. If it worked out, I figured 4×4 was the next logical step and I’d already have the jig 🙂 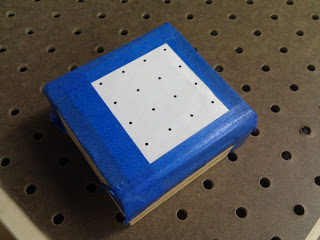 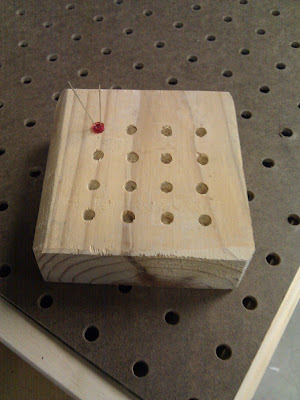 After the boys crashed on Monday night, I made the first two layers and setup the Arduino and breadboard so that we could build one layer together, attach it and they could see results almost immediately. For those keeping score, yes, I did bring an Arduino, LEDs, a soldering iron, solder, eye protection, pliers, snips, a breadboard, jumper wires, and alligator clips to the BEACH. It rains a lot here, OK?! 🙂

The completed 3x3x3 Red LED Cube…the cathodes are all connected together on each horizontal layer and the anodes form the vertical risers. Lighting a specific LED means activating ONLY that cathode layer and that anode riser. The microcontroller does this very quickly and takes advantage of persistence of vision to make it appear that multiple lights are on at one time. 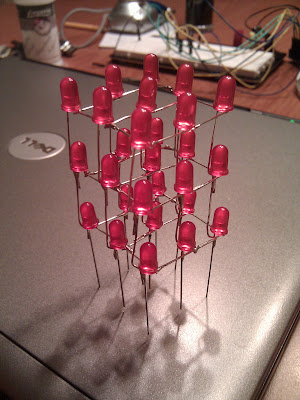 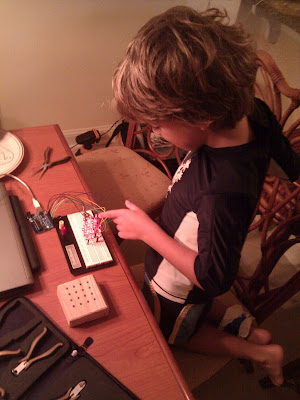 The pics and video don’t express the “cool” factor of the 3 dimensional light animation. If I had the patience, I’d build a really large one of these – say an 8x8x8 or maybe even an RGB one – but I don’t have the patience to spend a week bending and soldering. I’m surprised I haven’t found links yet to buy them presoldered out of China 🙂

Why would you want an 8x8x8 RGB LED Cube? This video shows how cool they are…

And just in case you were wondering, after building the LED Cube, we went bowling, had lunch, went to Best Buy to get new video games, played the new games for a bit, went snorkeling, threw the Nerf  whistling football on the beach, went grocery shopping, made dinner, played more video games, played tennis, went swimming, played two games of  chess with the large set on the sun deck, played more video games (while Dad did laundry and dishes) and all passed out at 10pm 🙂  Whew!