Last weekend I asked my son “want to hack that joystick today?”

He turned off the tv and came over to see what I was doing. This Control Panel father + son thing might be working after all!
We spent a few hours removing panels, testing continuity and determining the function of all the wires.
The trigger & thumb switches were easy, but the axis were a bit confusing.
Here is a pic of the device that measures axis motion 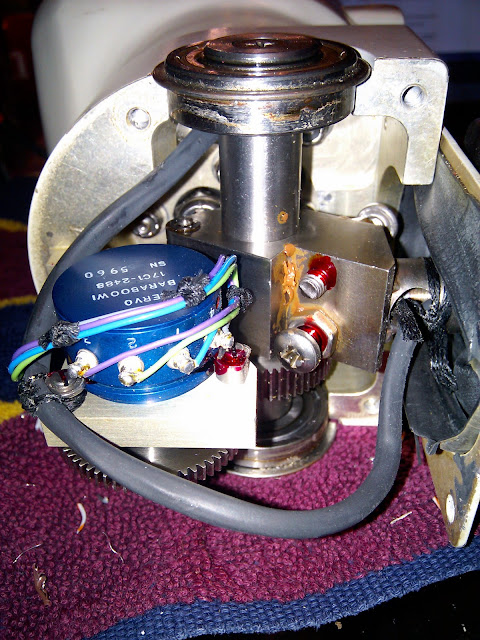 They are labeled:
SERVO
BARABOOWI
17C1-2488
A quick trip to google discovered the Servo Instrument Corp in Baraboo, WI. Unfortunately they don’t have any product information online. There is one of these devices for up / down and another for left / right. I emailed them for information, but they didn’t return my email.
After playing with the multimeter for a while, I determined that I can read resistance from them – the resistance is 0 at the axis center and goes up to 2.5k ohm at the far deflection. So I can tell how far the stick is off center, but I can’t determine which direction.


If anyone reading this has ideas on how to work with these devices, please leave a comment!
Given the sheer quantity of output wires and a nice big space in the back of the joystick, I decided to build a quick input shift register circuit (I had experience too!). This lets me get all the signals from the joystick to the Control Panel on a single cat5 cable. 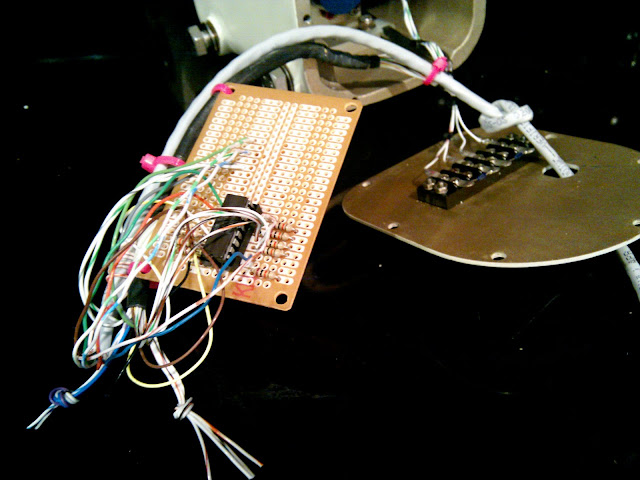 I didn’t get outputs from the 4 way hat control, so I left room on the PCB to add another shift register if needed. This board and extra cable were shoved in the back of the joystick.
We took the joystick to Home Depot to determine some type of mounting. I felt like this would be a long adventure but wanted to get it solved.
I was thinking of using a pipe flange with an olympic weight as a base. We hit the plumbing isle and started looking for flanges. Lou picks up a toilet flange. I scoffed, but then gave it more thought. We bought some 5″ PVC and two all plastic toilet flanges.
We then headed over to find some mounting brackets…I wasn’t finding a thing, but Lou found this one bracket that seemed feasible. We looked for another one for 20 minutes, then realized that it was a roof truss tie in the wrong section. Once we found the rest of the ties, we found an even better bracket.
On the way home I started thinking about cutting the wood base. I hate cutting circles, and I remembered I had an IKEA lazy susan I’d bought for a project and not used. It turned out to be PERFECT. A little time with the bench grinder and the drill press and I had it mounted. 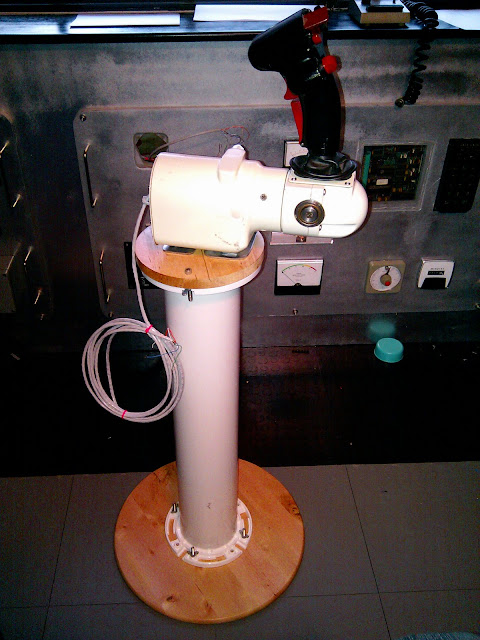 This pic shows the mounting brackets (with all the corners rounded) and the height compared to the bed. I think he will be sitting on the bed using it, and its a good height if he’s standing. I might put some weight in the bottom of the PVC to reduce the topple possibility even further. 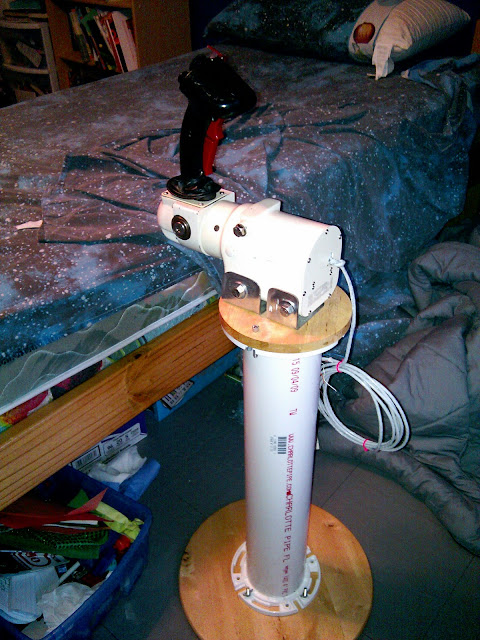 You can also see the cat5 hanging out the back. I thought about putting some nature of jack on the back of the joystick, but for now, its just a length of cable.
Lying in bed that night I told my wife that I had NEVER had a project come together as easily as mounting that joystick. I thought it would be a multi-day adventure and it was done in less than 3 hours INCLUDING the trip to Home Depot.