Christmas day I showed my dedication to learning the Arduino by cleaning off my desk to make room for it. For a starter kit, I had an Arduino Duemilanove (That’s the Arduino 2009 in Italian…took me a while to realize that…), a 20×4 Liquid Crystal display, jumper wires, and 3 RGB LEDs. I also had the “Getting Started with Arduino” book, and my past knowledge to get started.

A little background on my electronics knowledge and experience:


I’ve always been interested in electronics. My grandfather bought me the Radio Shack “All-in-one” kids when I was young, and I would sit for hours and build basic circuits. I’ve done lots of basic AC and DC stuff including car wiring, car audio, home theater, etc. I can do basic switch and relay circuits, use a multi-meter, etc. If you have a car or home wiring problem, I can solve it 🙂


On the other end of the spectrum, I have a computer science degree and have taken classes in microprocessor design that included logic gates, etc. I’ve coded in BASIC, Visual Basic, C, C++, Java and SQL.


In the middle however is this big gaping hole in my experience. I’ve built some basic 555 timer IC projects, but never got into logic, amplifiers, etc. I always felt I SHOULD know how to build complex circuits, but never took the time to learn.


A few years ago, I received the Radio Shack Electronics Learning Lab as a present from my in-laws. I knew it had a breadboard, some LEDs, switches and pots, so I dug it out of the closet. It is a PERFECT way to learn the Arduino.  The breadboard connections are oriented different than normal, but once I figured that out, I was prototyping the Arduino examples in no time. 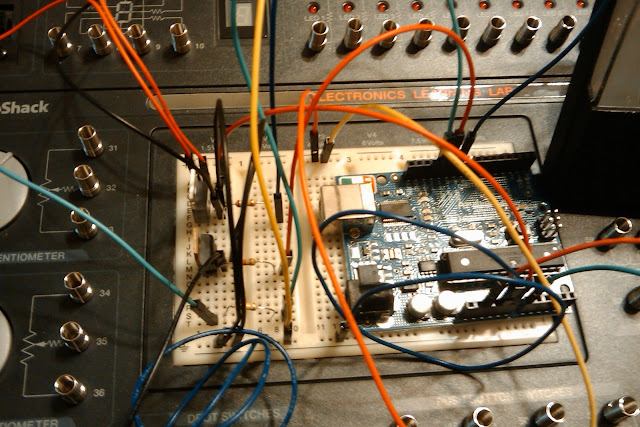 I started with the “Getting Started with Arduino” book, but was quickly disappointed in the amount of material. I later found “The Complete Beginner’s Guide to the Arduino” and wished I’d had it on day one.


On Christmas day I did the Blinking LED example, I’d read a potentiometer on the lab to control an LED brightness, I created a countdown timer using the 7 Segment LED on the Lab, I built  the Liquid Crystal example and then customized it. 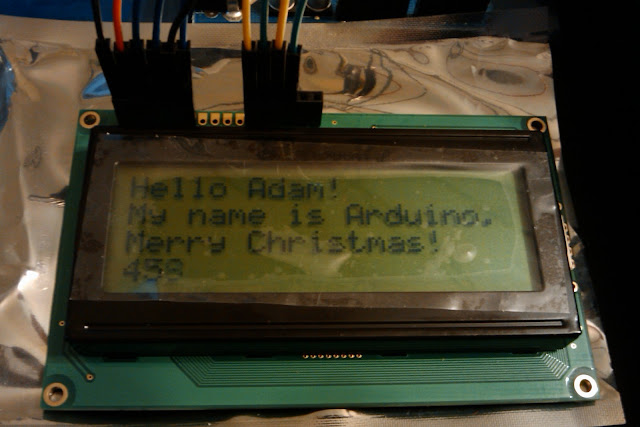 I could not believe how easy I was learning the Arduino platform. Everything was just working. My son saw the 7 segment and liquid crystal projects in the pic above, and I could see him trying to grasp how Dad made those things work. He told me the Arduino was “really cool”, and all in all it was one of the best Christmas days ever.