Once I’d integrated the WaveShield code, the liquid crystal code and the joystick code in with the existing Control Panel code I could really get fancy. My son had picked some sound effects from Clone Wars, and I’d found a few sounds online. The startup sequence was now accompanied by a rocket engine startup sound and joystick buttons were mapped to various sounds. I also mapped a “flyby” sound to the joystick axis. I had to give that one some thought since I only wanted to hear the sound once as the joystick heads off axis. I wait for it to recenter before playing the sound again.

I really wish the WaveShield supported simultaneous playback of multiple sounds, but for now, this will do nicely.

I made the liquid crystal display some startup text and also display when there was a red alert or an engine overheat alarm. 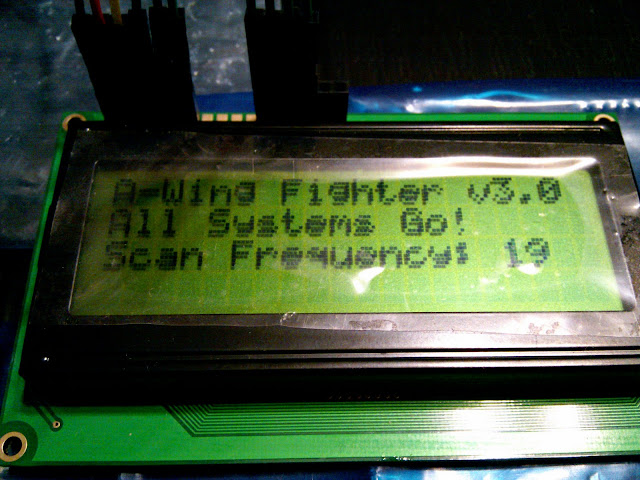 I remembered that there was a Star Wars A-Wing starfighter and since my son’s name starts with A and its powered by an Arduino that A-Wing would be interesting. I also gave it a version number. I’m not sure why, but I was on version 3 of my Control Panel software, so I made it version 3.0. When I showed my son, he was most impressed by the version number. I still can’t figure that out.

About 3 hours later, we are eating lunch and out of the blue he exclaims, “I GET IT!” He’d realized the A in A-Wing was from the A in his name. When I also pointed out that Arduino starts with A he liked it even more.

As for that “Scan Frequency” on the liquid crystal – its that random number being fed to the leak rate gauge once per second – but I have a special use for it coming soon. Stay Tuned!