Up to this point, I’ve been working on individual smaller prototypes.

I’d built a WaveShield + Mega prototype, a Liquid Crystal + Duemilanove prototype and I’d built my “modules” for the Control Panel output circuits for the lighted buttons and gauges that had been running on the Duemilanove for days. I also had the shift.in board that was shoved into the joystick that would need to be connected along with the analog axis pots.

It was time to integrate it all – both hardware and software. 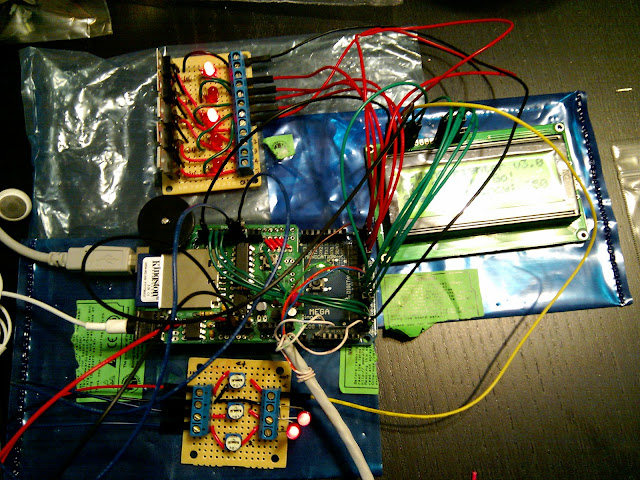 The integration of the hardware was easy. I’m getting really fast at wiring these things up. Integrating the code took a bit longer, but I had to remap lots of i/o pins over to the Mega AND I documented them all.

Once I had it together, the audio started skipping. Great.

I started commenting out sections of code to determine what was causing the skipping. As soon as I commented out the shift.in read code, the audio stopped skipping.

I dug into the code and found a delaymicroseconds() call. This call disables interrupts which are used by the WaveShield. I was hoping the shift.in code wasn’t timing sensitive, so I changed the call to delay(1) instead AND IT WORKED!

That was the only real integration trouble. The code is getting messy and I suspect I’ll be doing some cleanup soon. I’d like to use interrupts & timers more, but I’ll save that for later.